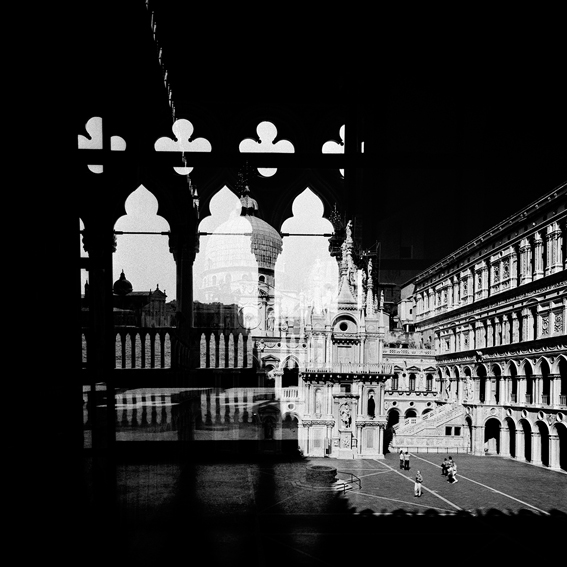 Let’s conduct a mental experiment. Without pencil and paper.

Let’s draw a line in our minds. It has one dimension ‐ length. Perfect. Let’s add to this segment three more of the same length to make a square. Now we have an image of a square in our head, right? Great. Like any other flat figure it has two dimensions: length and width. Because we have been drawing a square, its length is equal to the width. Thank God. Now we continue our mental experiment. Let’s add height to the square. The height is the same as its length and width. Doing this, through an elusive movement of consciousness we pull the square up from the flat plane (meanwhile, the base remains in its place). Now we have a cube. Great. It has three dimensions: length, width and height. That’s why it (like all of us, all objects and inhabitants of the known part of the universe) is three‐dimensional. It is necessary, however, to mention that now the majority of theoretical physicists, experts in String Theory, believe that there actually are far more dimensions, but we’re not talking about that. On the other hand, why not? We’re talking precisely about that.

+Let’s try several times to turn our square into a cube. Now we can do it easily. O.K.! Let’s continue our experiment. With the same imperceptible movement of thought, which we use to convert the two‐dimensional square into a three‐dimensional cube, we make a breathtaking transformation of a cube into a tesseract. That is, into a four‐dimensional object that has the main properties of the cube ‐ all its sides are equal and all the angles are right angles. But now it already has four dimensions. Length, width, height, and some other fourth dimension. The fourth dimension, by the way, has no official short name and I’d like to use this opportunity to offer a choice: Quadrtitude or Tertatude, depending on which root you prefer, Latin or Greek. But in no case should it be called Quadrino or Tetrino. It sounds awful. Just kidding… In order to complete the experiment successfully, it is necessary to understand how this tesseract will be seen by us, people of Earth? We are still living in three spatial dimensions. (Time, of course, can be interpreted as the fourth dimension, but it is definitely not a spatial one). To answer the question “how would a tesseract appear to us” we must return to our mental experiment and try to understand how a three‐dimensional cube can be projected onto a plane? How would our usual cube appear to some imaginary beings who live only in two dimensions? (In scientific books there is already an official name for such a place – “Flatland”). It’s funny, but the creatures of “Flatland” would see the cube differently, depending on our perception. You can just put the cube on the plane and in the projection you will have a square. You can put it on one of the sides and then (especially if lit differently from both sides) you’ll get a familiar line drawing from a children’s art class. You can put it one of its edges, and then you’ll get a different kind of projection. This means that a cube can be presented in different ways in two‐dimensional space.

The same is true for a tesseract in three‐dimensional space. It will appear differently, depending on how the inhabitants of the fourth dimension, will present it to us. In fact, the fourth dimension is yesterday’s news. It was introduced by Bernhard Riemann during his brilliant historic lecture in 1854. Near the end of the 19th century the idea had taken off as an exciting intellectual topic. I will allow myself quite a long quotation from Michio Kaku: . For instance, the art historian Linda Dalrymple Henderson believes that Picasso’s Cubism arose partly under the influence of the fourth dimension. (Portraits of women by Picasso, in which the eyes are looking forward and the nose is at the side, represent an attempt to introduce a four‐ dimensional perspective, because when viewed in the fourth dimension, you can simultaneously see the face, the nose and the back of the woman’s head). Henderson writes: “Like a black hole, the fourth dimension had mysterious properties that could not be fully understood even by scientists.

I don’t know if musicians ever concerned themselves with the fourth dimension but it would be interesting to hear the sound of a violin in hyperspace. Or to know how a four‐ dimensional organ might sound in our world. This is all possible because the fourth dimension is intellectually comprehensible. We can work with it. For instance a mathematics student is able to calculate the volume of a tesseract, the number of its sides, its surface area. Likewise, for example, a student can calculate the volume of a hypersphere (a sphere in the fourth dimension, relates to an ordinary sphere just as a tesseract relates to a cube), inscribe this hypersphere in a tesseract and even show us the possible results of these actions. Moreover, the four dimensions are just the start. This is just the beginning of something important but almost unimaginable. Mathematicians have long known how to work with any number of dimensions.

This, in fact, gave birth to String Theory, which claims today the status of the main theory of the modern era, the status of the theory that explains consistently the whole of our world, the so‐called Theory of Everything. It says there are nine spatial dimensions in all: our three large dimensions and six extremely small ones, so small that they still elude us totally. Oh well. Let’s assume that our mental experiment is complete. Let’s go back from the Theory of Everything to contemporary art. There is a sacramental, vulgar and, unfortunately, inevitable question – “What did the author mean by his work?” In a modern interpretation that sounds like “What is the author’s artistic statement?” Actually, I do not like such questions. What had Leonardo wanted to say with his Last Supper? Hundreds of books, thousands of theses have been written on this subject. I am not an expert in art and do not claim to know the truth in all four dimensions but from my personal point of view Leonardo did not want to say anything through his work. Well, hardly anything.

He wanted to show that Christ is young and handsome; that the apostles are young and handsome; that they have something to talk about; that right now everything is good, but soon it will all be doom and gloom. Yet I think that this idea may fall short of an artistic statement from the art professional’s point of view. Nor can I say anything specific about my own artistic statements. I can tell you about the technique I use and why I do so. Which camera I use, which lens, whether I use a shift lens, which film I use, which filter, which shutter speed, what kind of developer and how long I expose the film at different temperatures. But technology is not the most important thing in photography. I mean, it is very important, just as for Leonardo it was important to choose paint recipes and priming techniques (with the Last Supper, as we know, he overdid it with experimentation), but anyway, paint is formally available to all – however everybody uses it differently. At the same time, I am sure that when Leonardo spoke on professional topics, he was much more interested in chatting about paints, primers, why a squirrel‐hair brush made by lame Giovanni was better than Kolinsky sable‐hair brushes made by red‐haired Frederick, about what wonderful landscapes there are in Tuscany and Umbria, what new models appeared in Milan, what fee Michelangelo had named for his chapel. He’d rather tell his friends about the kind of flying rubbish made out of starched cloth he’d come up with and answer sceptical questions like “who is going to produce it, and, most importantly, who would use it” and so on, than to argue about the meaning of his own work and his artistic expression. I chose 6×6 format because of the tesseract. Because I wanted squares. Because I like squares. I shot almost the whole series with an Alpa. I love this camera. It is just as reliable as a Swiss army knife and just as sophisticated as a Swiss watch. And they produce it in Switzerland, by the way. It is beautiful. It is very pleasant to hold. Wooden handles, blue steel. And this may seem strange, but it is also very important: it’s much easier to create beautiful things with something beautiful. Now moving on to double exposure. It’s the method I used to find out what Italy must look like in the fourth dimension. It is a simple trick and has been used (though rarely) since the 19th century. You make two shots using just one negative. That is, you take one shot and you do not rewind the film.

You cock the shutter once again and shoot something else onto the same negative. It’s not difficult; you just have to reduce each exposure by a third. Although actually it’s not that easy. You still need to take a beautiful shot. At least avoid an ugly one. And it’s not as if it’s a digital camera where you can see a preview. And not like Photoshop where you can hide a layer, bring back a layer, etc. You have to think about two frames simultaneously, and that is the idea of the fourth dimension, you are trying to imagine it, to retrieve it. Yes, it is complicated. cp The film that I use is no longer manufactured. Efke 820IR.

The factory was closed and it will never open again. Humanity is losing its own technology. Of course, I still have some stock, but… That’s it as regards film. You cannot do without it, if you shoot in infrared light. The matrices of a modern digital camera are not sensitive to this kind of light, even if you remove your IR blocking filter. I’ve tried almost everything, from hand‐made cameras, supposedly adapted for such photography, to Hasselblad H3DII ‐ everything turns out very dull and not very infrared‐looking. But the most important question that I always have to answer is why do I shoot in infrared light. I can answer: because it is invisible. I shoot familiar objects created by nature and the human mind in light that we’ll never see, because the retina in our eyes does not detect photons in this range. Therefore, the world in my works is the same as the one we live in but at the same time a little different.

It is very similar to our world, but it is not quite our world. In this world sky and water are black. If the sun hits trees and grass they become snow‐white. And there’s much more to it that does not stand out but that can only be seen by comparing two identical photos taken within a few seconds of each other on classic black‐and‐white film and on infrared film. I demonstrated the results of this simple experiment at the exhibition “Because the World is Round” in New York’s Central Park. Basically I photograph a non‐obvious world. A world that is nearby, but not ours. Very similar to ours, yet different. And when I added double exposure to infrared light, I suddenly realized what Italy must look like in the fourth dimension. And that’s why I thought it was important: what if theologians are right and God does live in the fourth dimension? I wonder how he sees Italy…

Palazzo Ducale From the Fourth Dimension 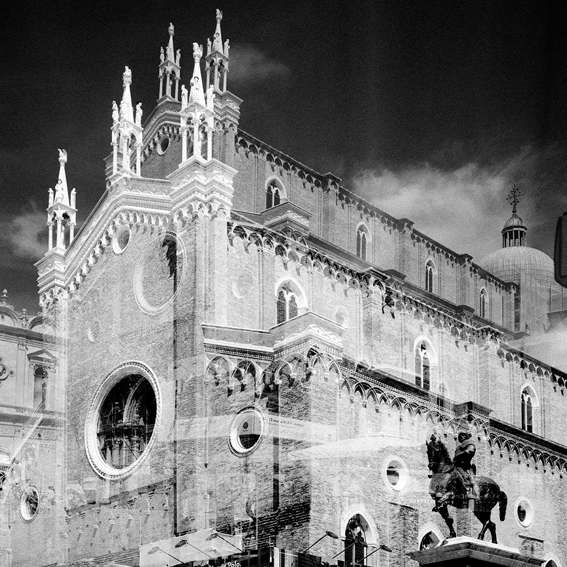 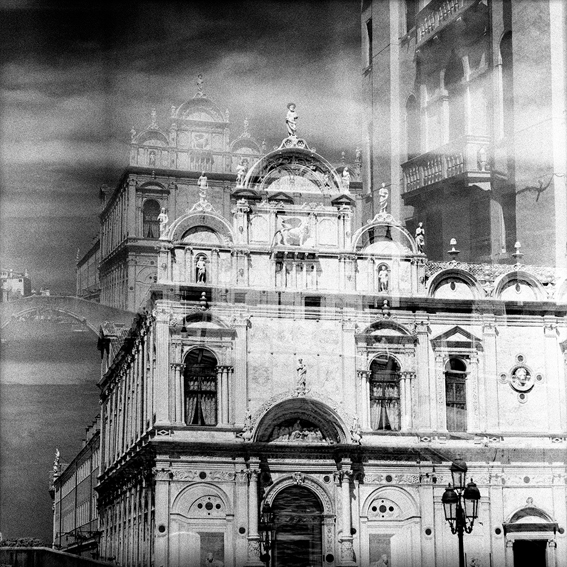 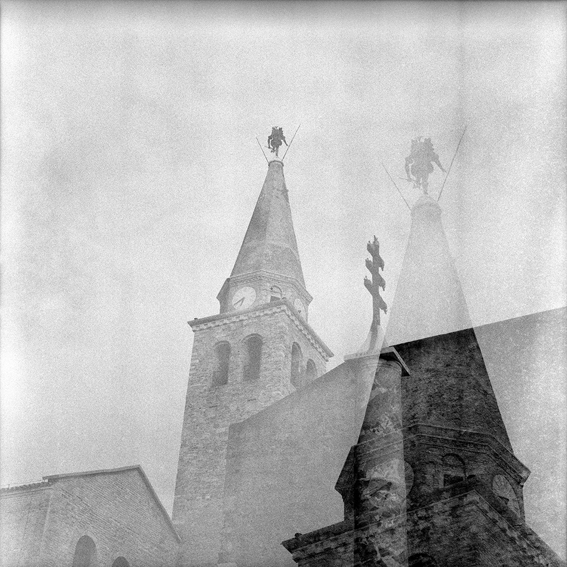 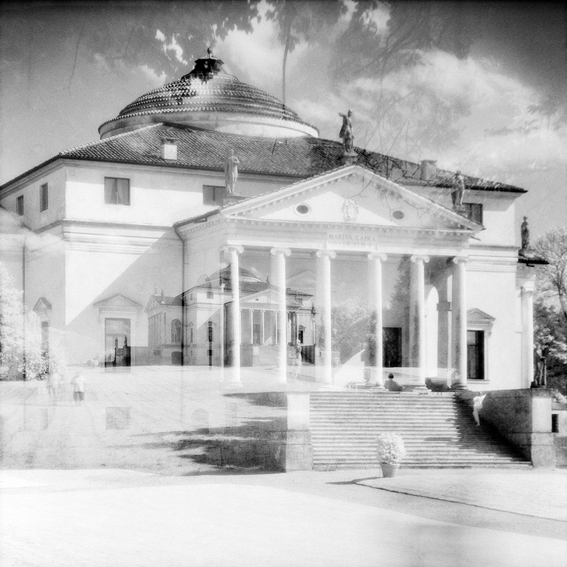 Rotonda is pregnant with Rotonda 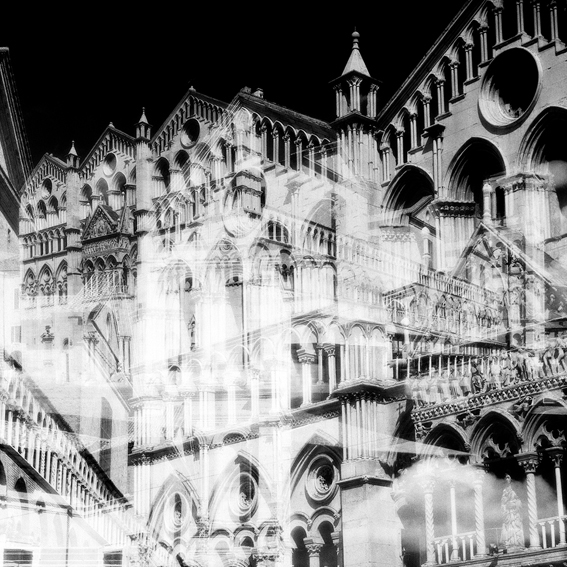 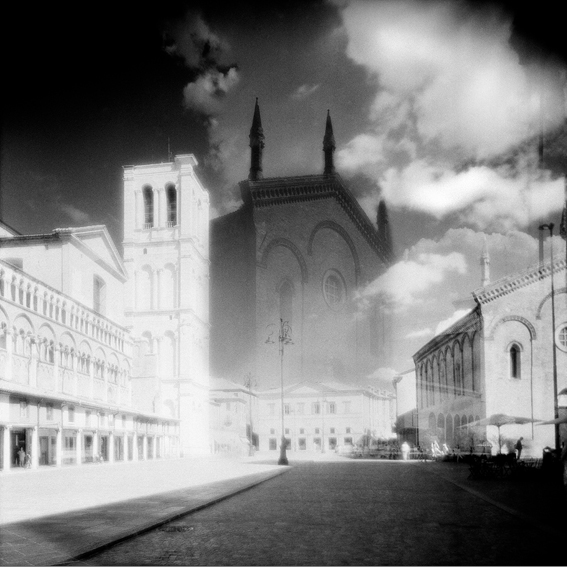 All of a Sudden a Church Loomed Forth 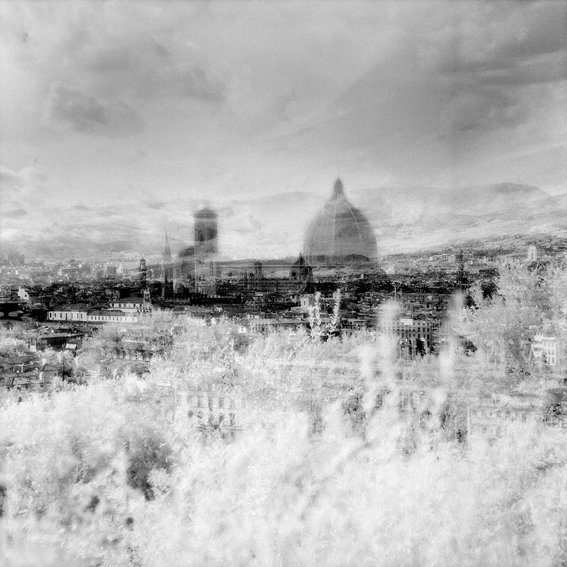 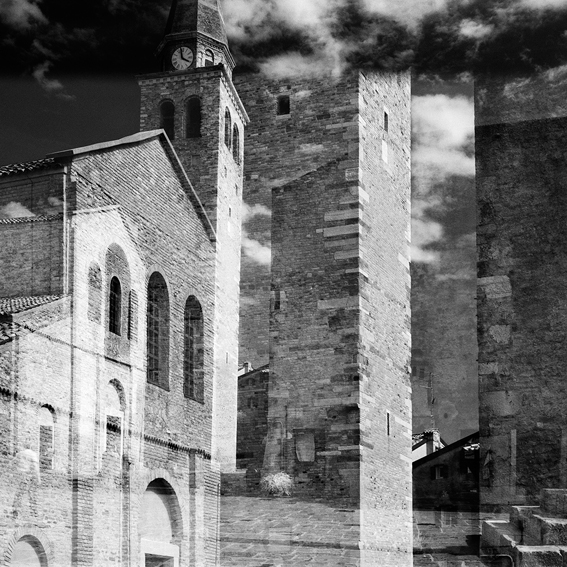 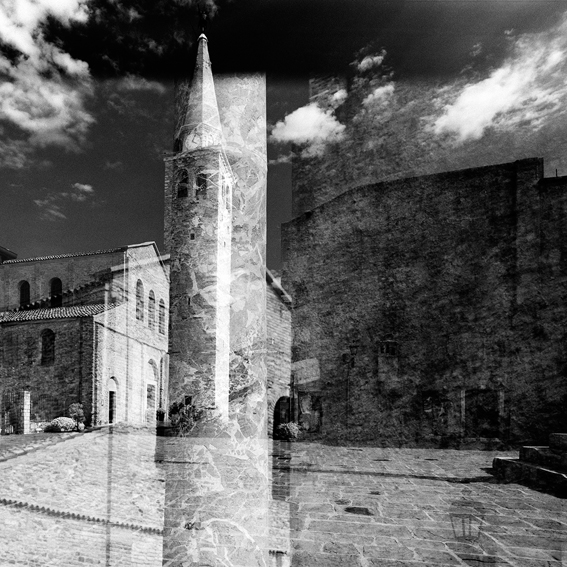 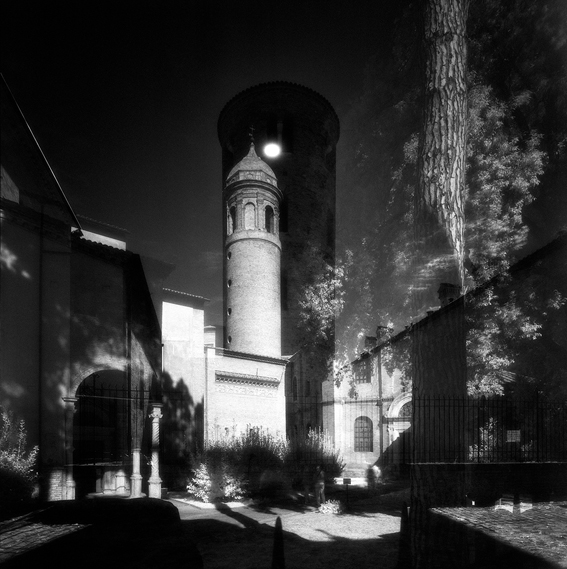 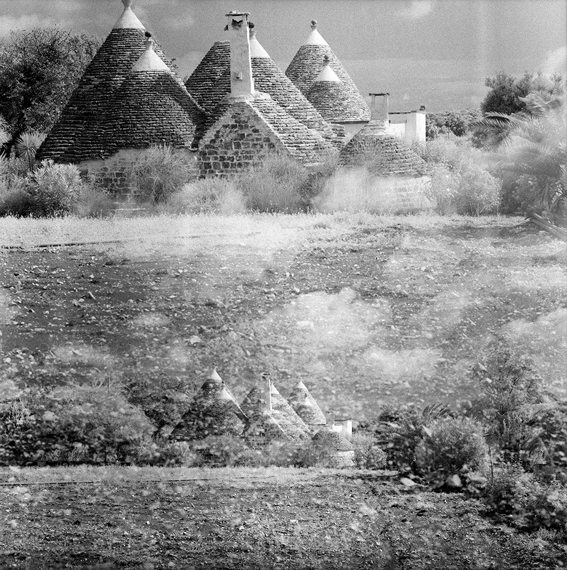 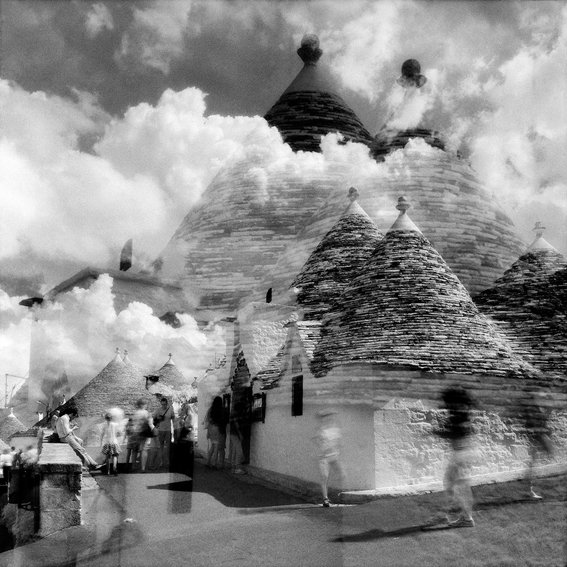 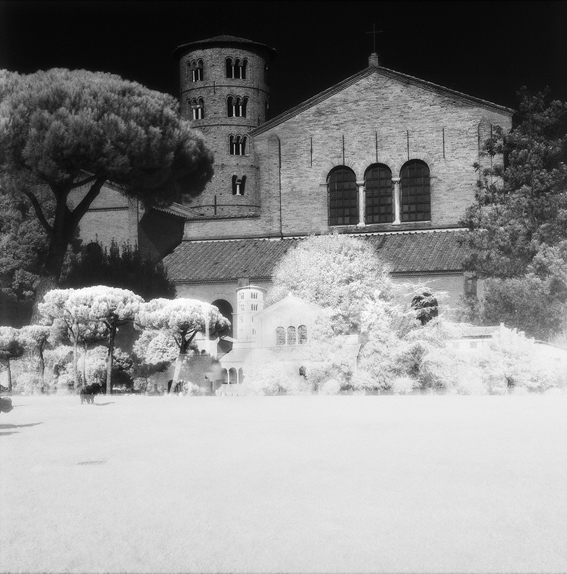 Apollinare of Ravenna - Large and Small 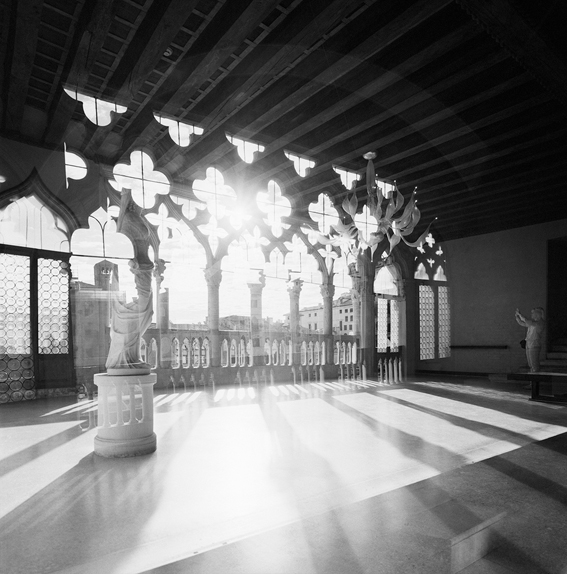 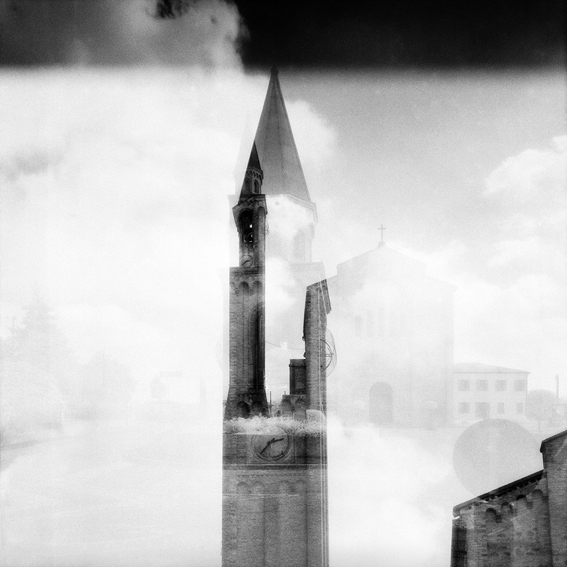 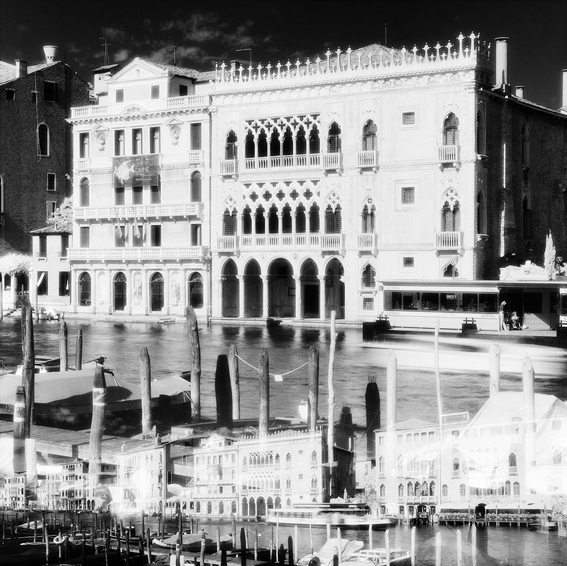 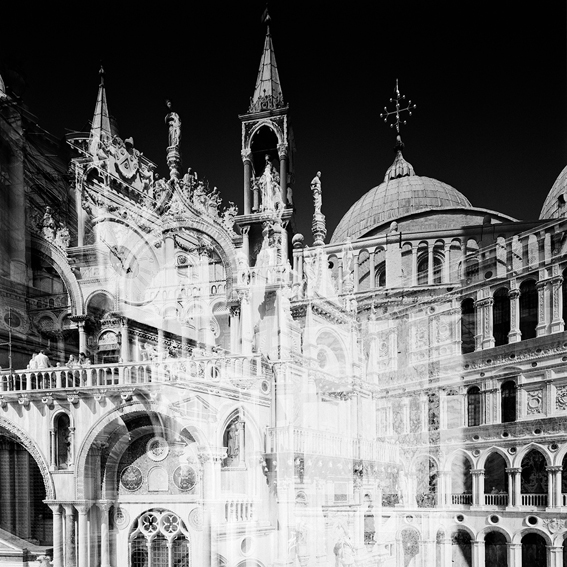 An Attempt to Understand Venice 1 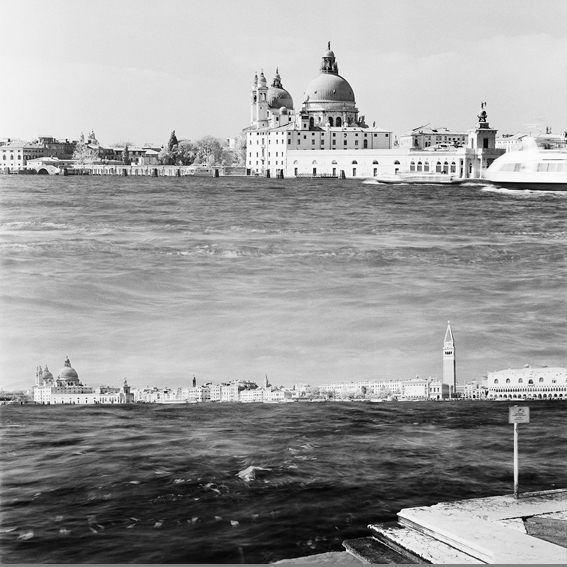 An Attempt to Understand Venice 2 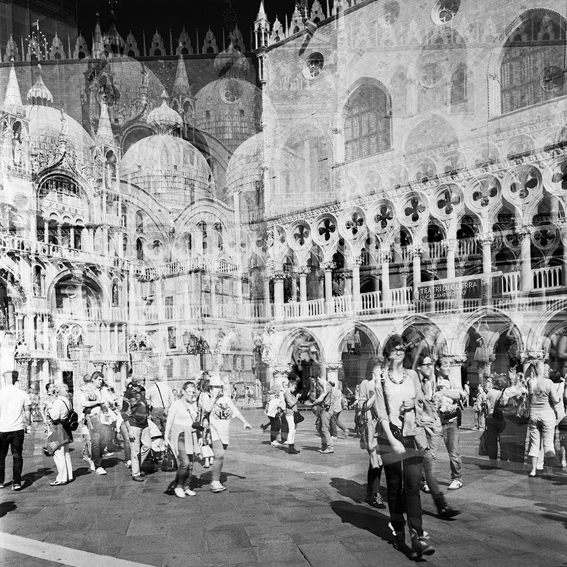 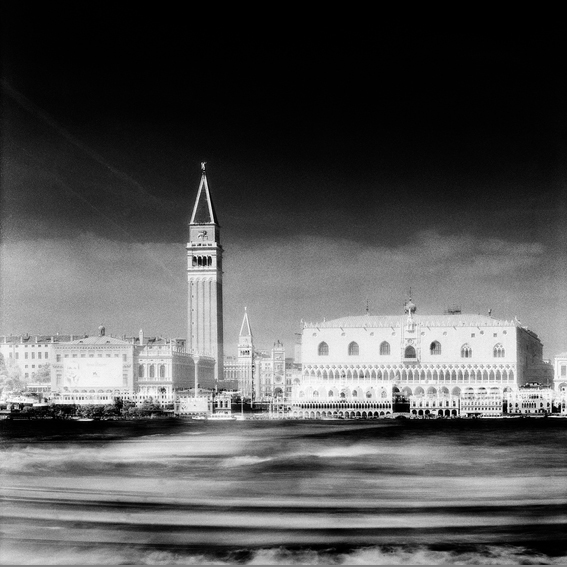 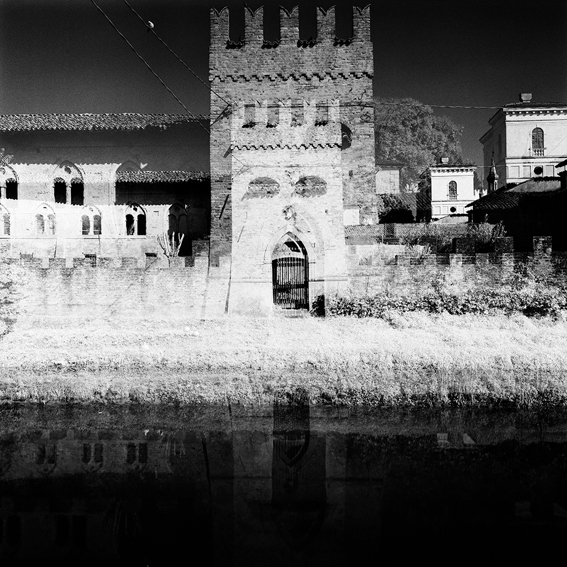 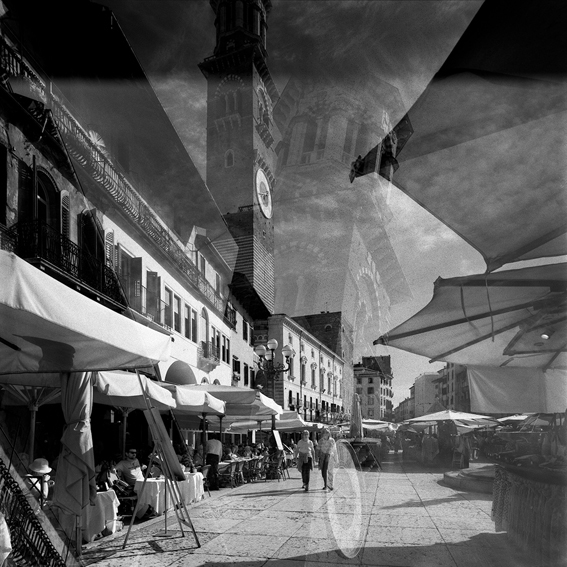 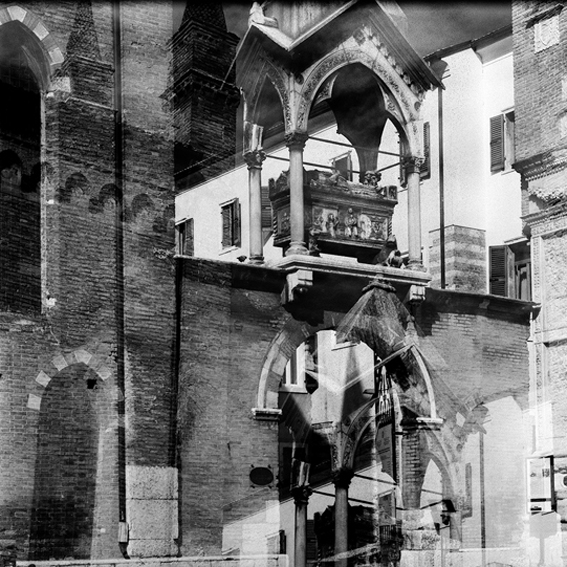 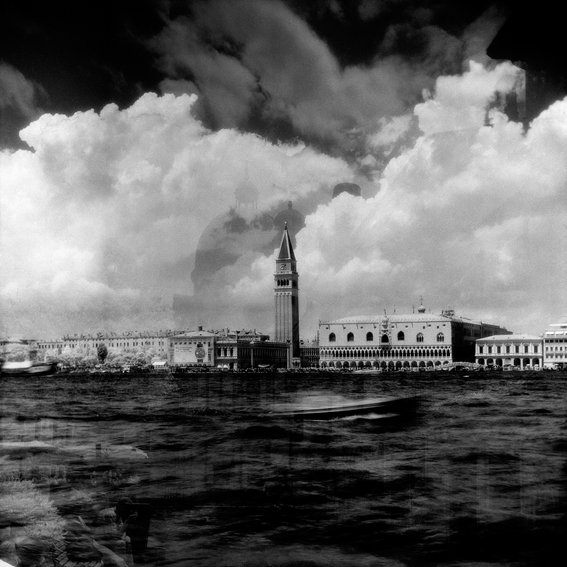